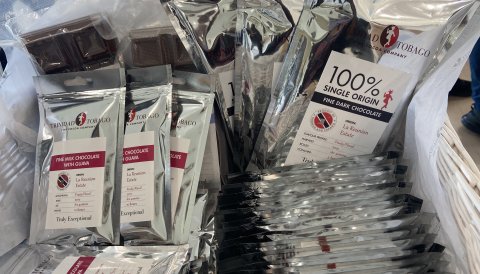 Trinidad and Tobago Fine Cocoa Company (TTFCC) announced its investment in a new production plant for the manufacturing of culinary chocolate products for the export market, at its media launch event held on 22nd November 2021, at The Chocolate Box, Hilton Trinidad & Conference Centre in Port of Spain.

According to Ashley Parasram, Founder and Director of the TTFCC, “we don’t just want to see Trinidad’s chocolate as the best but also as fantastic for culinary use”. To achieve this, the TTFCC has partnered with the Institute of Culinary Education in New York and three-starred Michelin chef, Michael Laiskonis. This collaboration will be the catalyst to position Trinidad and Tobago’s award-winning Trinitaro cocoa and chocolate products before North American and European markets. Parasram disclosed that this expansion by the Trinidad and Tobago Fine Cocoa Company is part of a wider investment in a new state-of-the-art cocoa processing facility planned for 2022.

In her remarks at the launch event, Senator the Honourable Paula Gopee-Scoon, affirmed the Ministry of Trade and Industry’s support. She stated that the value-added chocolate bars and chocolate products are really what will take Trinidad and Tobago forward as it will

“contribute to the development of the agricultural sector, ensuring that the cocoa industry makes a finer contribution to our economy.”

Parasram emphasized the importance of building on the partnerships with the Trade Ministry, InvesTT and other public and private agencies, as he credited these partnerships for TTFCC’s ability to create a range of innovative cocoa products. He went on to applaud InvesTT’s continued role in facilitating the expansion of TTFCC’s operations to supply the international market.

InvesTT has remained committed to facilitating the investments of the Trinidad and Tobago Fine Cocoa Company over the past 7 years. The investment promotion agency continues to work on behalf of TTFCC to secure an expanded space to accommodate its most recent expansion into the international culinary arena. Parasram endorsed the services InvesTT offers to investors as he previously shared that

“as a diaspora investor, InvesTT helped me navigate the business environment in Trinidad and Tobago. I can easily pick up the phone and get advice from them. They are a key partner and our best friend in business.”