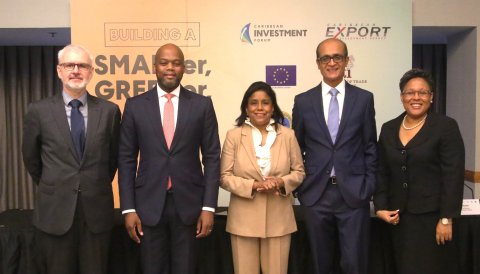 Senator the Honourable Paula Gopee-Scoon, Minister of Trade and Industry, underscored the importance of cooperation among CARIFORUM countries at the opening ceremony of the Caribbean Investment Forum (CIF 2022) which began today and ends on Friday 11th November, 2022.

Senator the Hon. Paula Gopee-Scoon, Minister of Trade and Industry, Trinidad and Tobago

She stated “For CARIFORUM countries, our cooperation is an important source of socio-economic development for the citizens of the region done in collaboration with the European Union which continues to be a valuable partner. CARICOM and the Dominican Republic have had a constructive relationship with the EU - whether it be through the Lomé or Cotonou Agreements with longstanding African and Pacific partners or through the CARIFORUM-EU Economic Partnership Agreement (EPA).  This engagement further fortifies linkages between and among CARIFORUM countries as well as with “Europe in the Caribbean” through the Dutch and French countries and territories.”  Minister Gopee-Scoon welcomed all participants and foreign delegates in particular His Excellency Wamkele Mene, Secretary-General of the African Continental Free Trade Area, all CARIFORUM representatives as well as those from Martinique and Curaçao.

Minister Gopee-Scoon noted that in this era of unprecedented global disruption and turbulence, the Caribbean remained a place of relative certainty and continued to be an attractive location for foreign direct investment (FDI) due to a number of key indicators such as: the region’s economic and political stability; highly skilled, well-educated population; strategic location near to North, South and Central America; numerous trade and investment agreements that give access to substantial markets; abundant natural resources; and significant trade openness.

Ambassador Peter Cavendish - Delegation of the EU to Trinidad and Tobago

His Excellency Peter Cavendish, Ambassador Extraordinary and Plenipotentiary – Delegation of the European Union (EU) reinforced the EU’s commitment to the Caribbean region, as a prime mover in global trade. He outlined the benefits of the Global Gateway initiative under which the EU seeks to invest EUR 300 billion in infrastructure between now and 2027 – “This initiative brings together the resources of the EU, including Member States, European financial institutions and national development finance institutions.” Ambassador Cavendish expressed that work has already begun on an EU-Latin America and Caribbean Investment Package the details of which will be announced in 2023.

In her contribution at the Forum, Secretary General of CARICOM Dr. Carla Barnett praised the timeliness and objectives of CIF 2022 to explore key areas of opportunity which ‘challenge the region the most.’ She highlighted the renewable energy sector to be at the forefront for economic transformation – “For CARICOM countries, like all other Small Island and Low-lying Coastal Developing States (SIDS), climate change is an existential threat. To combat it requires us to build environmental and economic resilience urgently.” She expressed that food security is also high on the agenda – “CARICOM Heads of Government have committed to reducing the Region’s food import bill by 25% by 2025. Therefore, the focus on investment in agro-technology at this Forum is most relevant to achieving the ambition of the Heads of Government along with farmers and agro-processors.”

Another key highlight on Day 1 of CIF 2022 was the subject of improving trade and investment between Africa and the Caribbean and by extension, Trinidad and Tobago. “African countries and the Caribbean must move beyond emotional historical ties and transition the relationship to one of commerce and trade.” This was a key highlight of the contribution made by His Excellency Wamkele Mene, Secretary General, African Continental Free Trade Area (AFCFTA). He encouraged both regions to “rely on each other and diversify our markets for exports and investments.”

At the subsequent media conference, Minister Gopee Scoon stated “The first area to undertake is via the export of services. There is opportunity for greater connection between Africa and Trinidad and Tobago and this is already evidenced through the export of our financial services to Africa through Republic Bank’s expansion to the continent. There are also opportunities for increased export of energy services and identification of opportunities to improve connectivity – transport and logistics -  between the continents. Other value chain opportunities can be identified in the African market such as alcohol and chocolates.”

The Caribbean Export Development Agency (CEDA) in collaboration with the Government of Trinidad and Tobago, the CARICOM Secretariat, the Caribbean Development Bank, the Caribbean Association of Investment Promotion Agencies and with the support of the European Union are the key drivers of CIF 2022. Mr. Deodat Maharaj, Executive Director of Caribbean Export indicated that the response to participation at the Forum was overwhelming as it represents an excellent platform for “businesses to engage with businesses to create business” that leads to jobs and opportunities for the Caribbean people. “When you think of the Caribbean, do not think ‘small’, think instead of opportunities and access to lucrative markets.”

Commenting after the Forum’s opening ceremony Sekou Alleyne, President InvesTT expressed – “We are happy to partner with our regional counterparts at this Forum to welcome the foreign investors hailing from all parts of the world – USA, Africa, South America, UK. We’re presenting the Caribbean as an investment destination across all value chains and sectors to ensure that when investors consider the regions of the world, the Caribbean is part of their business expansion objectives.