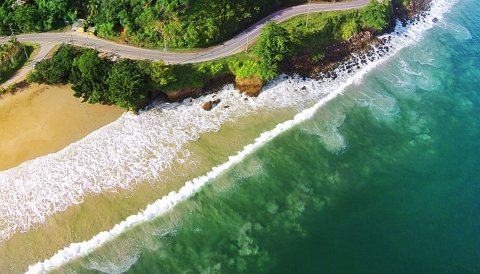 The Las Cuevas Estate located on the north coast of Trinidad and Tobago has best been described as the ‘Jewel’ of the Southern Caribbean and is indeed a prime mode for the development of 2 high value, high quality resorts.

The Las Cuevas Estate is 18km north east of Port of Spain or a 45 minute drive from the capital city. The site is bounded by the North Coast road to the south and framed by the Las Cuevas Bay on the north. To the east and west of the site are rain forest foot hills of the Northern range.

The Las Cuevas Bay received the prestigious Blue Flag award which is a voluntary eco-label awarded to more than 4,000 beaches and marinas in 48 countries across Europe, South Africa, Morocco, Tunisia, New Zealand, Brazil, Canada and the Caribbean. The only Blue Flag certified beach in the English speaking Caribbean, Las Cuevas has won the award 3 years in row since 2014 proving that it meets the stringent standards of the Foundation for Environmental Education.

The available space for sale is ideal for the greenfield development of 2 oceanfront hotels. The Las Cuevas Estate is privately owned by a citizen of T&T and is approximately 500 acres. It is envisioned that approximately 66% of the property will be developed to include roads, buildings, paved areas, gardens and landscaped areas. The remaining 34% is expected to be retained as natural forest. The existing parcel of land is currently undeveloped and does not include any present developments on the site.

The land is available for an outright purchase; there will be flexibility on the quantum of land based on the type of development proposed. The proposed developer will be required to build the relevant infrastructure for road access such as public utilities, refuse collection and recycling.

The Tourism Development Act (TDA), 2000 (as amended) provides for benefits to be granted to the owners/operators of various types of tourism projects, once these projects have the potential of contributing substantially to the growth of the tourism sector:

Customs and Excise exemptions include:

Talk to our expert